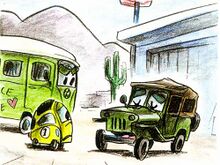 In the year 1998 when Pixar was wrapping up production for their second movie A Bug's Life, Jorgen Klubien wrote a script for a film called The Yellow Car and was about an electric car in a gas-guzzling world inspired by the story called The Ugly Duckling. Some of the characters and concept art were made in 1998, They also said that it could be the next film after A Bug's Life and released in the year 1999, but the idea was scrapped for Toy Story 2.

The premise for the film talks about a car living in a gas-guzzling world and the story is inspired by the Ugly Duckling.


Retrieved from "https://cancelledmovies.miraheze.org/w/index.php?title=The_Yellow_Car&oldid=13814"
Categories:
Cookies help us deliver our services. By using our services, you agree to our use of cookies.