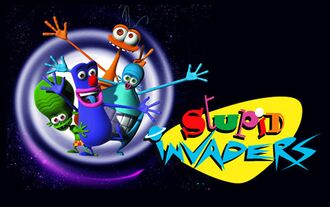 Stupid Invaders is a CGI animated film based on the Xilam's animated series, Space Goofs. Produced by Action Synthese (infamously known for Doogal (The Magic Roundabout) and Xilam and was going to be directed by Oliver Jean-Marie, the film was going to be originally released in the second quarter of 2009.

Four harmless and lit aliens including the broken saucer accidentally falls on our planet trying to escape a few overexcited earthlings: idiot general, stressed journalist, mad scientist in demonic plan, robot garden gnomes. To survive this stay forced into this mad world, the earth they will have to rely on the friendship and resourcefulness of a little girl fan of Science Fiction.

File:Stupid Invaders Trailer
335 px
Retrieved from "https://cancelledmovies.miraheze.org/w/index.php?title=Stupid_Invaders_(film)&oldid=16113"
Categories:
Cookies help us deliver our services. By using our services, you agree to our use of cookies.