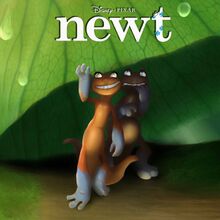 Newt, stylized as newt, is a cancelled Pixar film. Pixar and Walt Disney Studios announced the project in 2008.[1]

It would have been the Pixar studio's fourteenth animated film and was to be released in 2012, before being replaced with Brave.

A pair of blue-footed newts, Newt and Brooke, are the last remaining male and female of their kind on the planet forced together by science to save the species. The problem is they can't stand each other. The pair soon find themselves on a perilous, unpredictable adventure and discover that finding a mate never goes as planned, even when you only have one choice. Love, it turns out, is not a science.

Retrieved from "https://cancelledmovies.miraheze.org/w/index.php?title=Newt&oldid=1345"
Categories:
Cookies help us deliver our services. By using our services, you agree to our use of cookies.