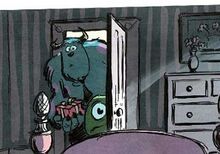 Monsters Inc. 2: Lost in Scaradise was a canceled sequel to Monsters Inc. It would have been produced by Circle 7 Animation, a company owned by Disney.

Pixar had a contract with Disney that would let them make 7 films on their own, with Disney only involved for distributing purposes. After this contract ended, rights to all franchises originally produced by Pixar would belong to Disney including rights to making sequels. When the 7th Pixar film, Cars, was finished, Disney formed another animation company known as Circle 7 Animation who began working on drafts for Toy Story, Monsters Inc., and Finding Nemo sequels. Nothing is known about the Finding Nemo sequel as of right now unless it ended up being Finding Dory.

In early 2006, it was decided that Disney would be better off owning Pixar altogether rather than just the franchises. As a result, Circle 7 Animation was shut down thus cancelling the drafts of the Toy Story, Monsters Inc, and Finding Nemo sequels, although Toy Story and Finding Nemo eventually got sequels made by Pixar, and Monsters Inc got a prequel.

One year after the events of the first film, on Boo's birthday, Sulley and Mike go to her house to wish her a happy birthday, however, when they get there, they find an old lady asleep in her bed. This leaves Sully and Mike to think that Boo has moved to a new home, so Mike and Sulley set out to find her.


Retrieved from "https://cancelledmovies.miraheze.org/w/index.php?title=Monsters,_Inc._2:_Lost_in_Scaradise&oldid=10695"
Categories:
Cookies help us deliver our services. By using our services, you agree to our use of cookies.