The plot would involve Ray, Winston, Egon, and Peter encountering ghosts in a Hellish version of New York City and eventually encountering the devil himself. 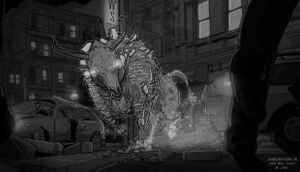 Storyboard of ghost from the unmade third film


Retrieved from "https://cancelledmovies.miraheze.org/w/index.php?title=Ghostbusters_III:_Hellbent&oldid=16234"
Categories:
Cookies help us deliver our services. By using our services, you agree to our use of cookies.